CBDCs: What are they, and where are they being developed? 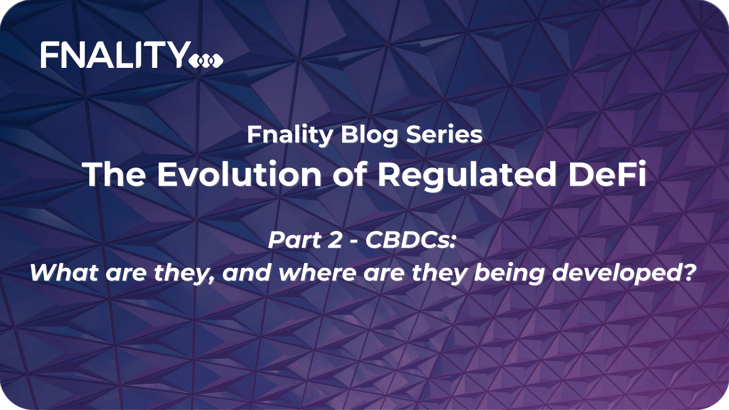 In our most recent blog post, we explored why the speed of market acceptance of stablecoins has constituted a financial stability concern for oversight authorities, one that has sped up their thinking around the need for a legal framework to regulate novel payment solutions.

Central bankers have also begun to explore alternatives to stablecoins, one particularly notable example being Central Bank Digital Currency (CBDC); a digital form of a country’s fiat currency, issued and regulated by the national central bank.

The financial authorities of around 90 countries worldwide - representing 90% of global GDP - are now exploring CBDC issuance and investigating the effect they may have on their economies, on existing financial infrastructure, and on broader financial stability.

In this blog post we review their official statements, we summarise the latest CBDC Proof of Concepts (PoCs) completed so far, and we share our view on the future of CBDCs and the growing central role of private sector initiatives like Fnality.

The future of CBDCs and the role of private sector initiatives

Most CBDC discussions today focus on retail applications (see again the Fed’s definition), where the CBDC would be used as a digital version of cash.

Despite the numerous POCs, no wholesale CBDC has yet gone live: the focus of several major central banks has shifted from the pursuit of wholesale CBDC to the incorporation of features of DLT into RTGS renewal programmes.

The absence of any live CBDC solution might indicate that public sector institutions may eventually rely, at least partially, on solutions borne from public-private partnerships, such as Fnality. This would follow the direction already indicated by the UK with respect to its Omnibus Account Policy; the UK expects DLT type solutions to come from the private sector and to utilise the Omnibus account.

Our view is that a CBDC could be a good solution for a single currency in its’ domestic market but will require significant collaboration between jurisdictions for cross-border payments. When it comes to foreign exchange transactions (PvP), two CBDCs need to be interoperable from a technical, legal, and a risk perspective.

If different jurisdictions each developed their own CBDC, Fnality could still offer an interoperability layer that ensures atomic cross-border settlements, compatible with different CBDCs, whether on DLT platforms or centralised systems.

Coming up in Part 3 of this series:

What will tokenised financial markets look like? Who are the players that will be leading in this space?

Don’t miss our third and final blog post on The Evolution of Regulated DeFi!

If you’ve missed last week's blog post on stablecoins, you can find it here.