The future is tokenised, collaboration between market players is key 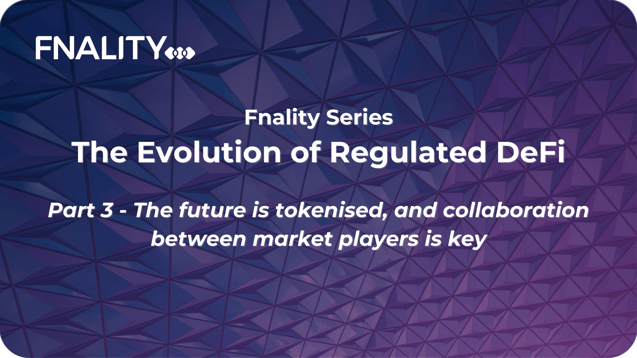 In our two previous blog posts on stablecoins and CBDCs, we have discussed why the speed of market acceptance of stablecoins has constituted a financial stability concern for oversight authorities, pushing them to speed up their discussion around building appropriate legal frameworks to regulate new payment solutions.

We have also explored the acceleration of CBDC discussions in response to the perceived threat to existing currencies that central bankers see in stablecoins.

In the third and final blog post of this series, we highlight that several traditional market players have demonstrated their intention to explore and enter the stablecoin/DeFi space as a competitive response.

The amount of retail and wholesale DLT initiatives launched to date are a strong indication that traditional institutions are now seeking to position themselves to develop and adopt tokenised financial market solutions.

In order to really empower tokenised financial markets, new means of payment, and new business cases, the most successful initiatives will eventually need to find a way to collaborate together to build a regulated, efficient and resilient financial ecosystem.

How to unlock the potential of tokenised financial markets

Traditional market players' PoCs[1] have been demonstrated technical feasibility for some time. They indicate that tokenisation of financial markets is already well underway, and that it will eventually be regulated in a similar manner to the current state.

Tokenisation in and of itself doesn’t guarantee that the current issues present in financial market infrastructure will necessarily be solved:

To truly unlock the potential of tokenised financial markets, these initiatives will need a decentralised interoperability layer - especially when it comes to cross-currency transactions - compatible with DLT platforms as well as centralised systems. Fnality can provide that interoperability.

But the convergence we foresee in the near future goes beyond tech design; it is about collaboration and the joining up of efforts to build a regulated, efficient and resilient financial ecosystem.

Fnality is open to collaboration!

[2] For a definition of Commercial bank money vs. Central bank money, please read Page 9 of the FED’s report

If you haven’t read the first two blog posts of this series, you can find our first blog post on the future of stablecoins here, and our second blog post on CBDC rollouts here.