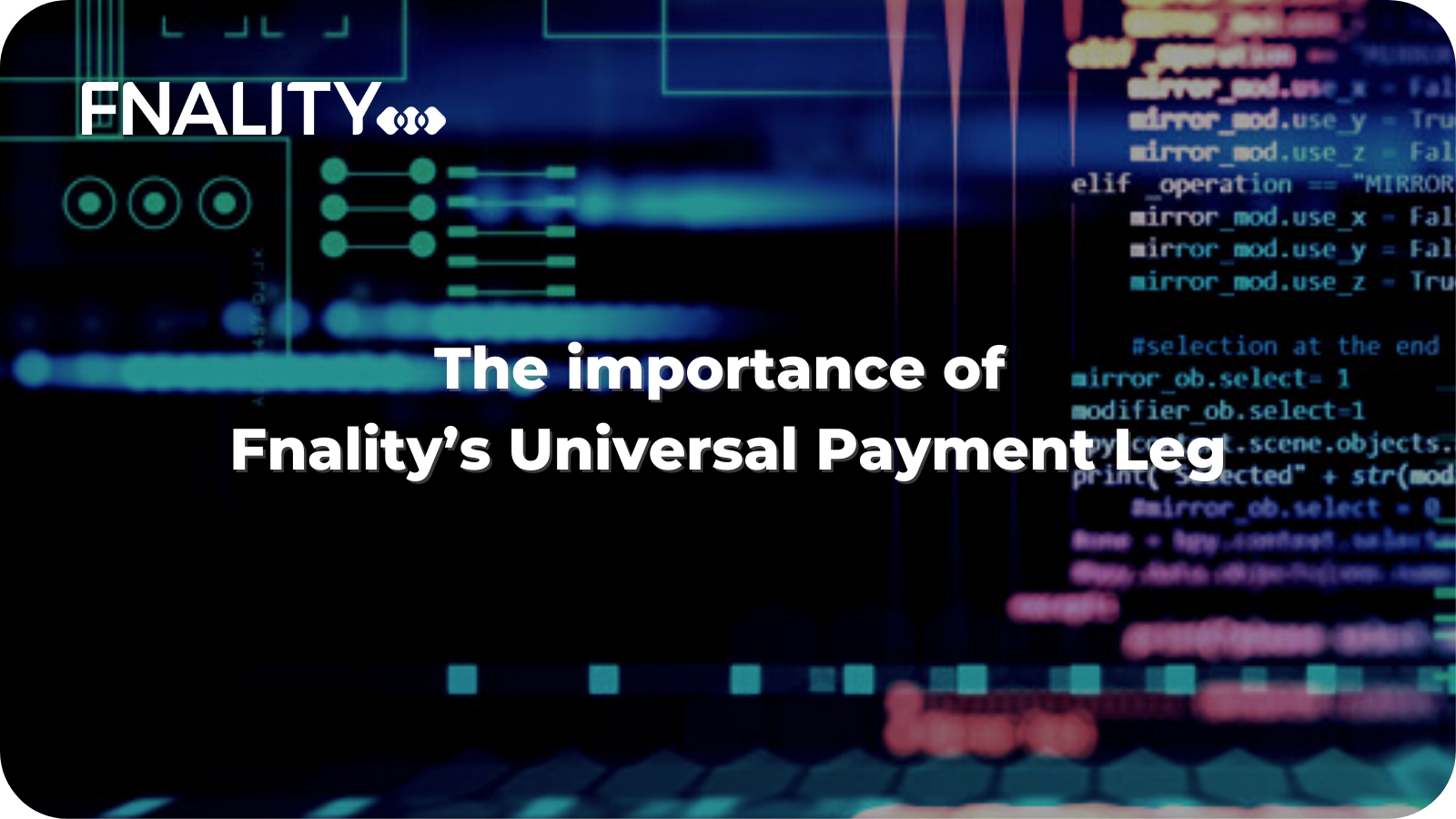 Digitisation and new technologies, like DLT and blockchain, are rapidly innovating the wholesale financial market industry.

At the same time, execution of transactions in existing markets, such as equities, fixed income, FX and derivatives have seen incredible digital automation.

However, post-trade processes which are necessary for the clearing and settlement of these transactions remain inefficient, slow and risky.

Through this article, I summarise at a high-level the current state of inefficiencies in the financial markets and explain the ways in which Fnality’s universal payment rail will play a pivotal role in the evolution of both existing and future markets.

What has the problem been so far? Post-trade landscape

It’s well understood in the industry that the back-end of a trade hasn’t kept up with the pace of innovation elsewhere across the transaction lifecycle, and it is thus much less automated. After trade execution, transactions can take several days to settle, all the while involving a plethora of intermediaries to manage the liability of underlying assets, and consequently exposing each of the trade counterparties to credit and counterparty risk.

This is in addition to operational risk exposure and associated costs, due to manual and reconciliation intense processes, leading to the potential for costly mistakes.

Additionally, settling a trade often requires significant liquidity buffers, and each treasury department must place money in a variety of accounts (including nostros, correspondents, domestic CSDs, and more) in different currencies, ready to be used across products and jurisdictions.

Thus, the current state of financial infrastructure is fragmented across many liquidity pools which are challenging to manage, costly and highly inefficient.

Wouldn’t it be ideal to access a ‘single pool’ of liquidity instead, to speed up settlements whilst reducing intermediary layers, lowering risks and costs, and shrinking the need for collateral of each transaction?

It's apparent that the financial industry is still missing a back-end innovation, a universal payment rail able to deliver parity and consistency between front-office and post-trade activity, enabling instant settlements, drastically reducing the risks inherent in reliance on intermediaries, and ensuring compatibility with any novel asset class.

With this in place, Fnality can enhance existing markets, unlock the potential for tokenised markets and empower the development of new and innovative business cases that do not simply exist right now.

The challenges of emerging tokenised markets

But ironically, the settlement of trades involving novel tokenised assets still relies on rather a traditional method to manage the transfer of value: the correspondent cash payment for any traded tokenised asset is likely to be done off-chain (i.e., it occurs outside of a DLT), which means going through the traditional post-trade settlement cycles, as outlined in the previous section. This is the reason why new digitised financial markets cannot deliver their full potential; if they don’t innovate at a post-trade level, they will not tackle the characteristic risk issues and inefficiencies of today’s markets.

In some cases, the payment can be now done on the same DLT, digital asset and payment token on the same chain, which means that it occurs with finality on the DLT. However, as outlined by the ECB in a recent paper “as industry participants are presently building their own DLT-based systems, there is a risk of incompatibility between the different systems, potentially leading to (further, Ed.) fragmentation”.

In short, tokenised asset trading platforms without an equivalent tokenised universal payment leg, that is risk-free able to interoperate with any digital asset platform, and without delay between execution and settlement - will simply create even more inefficiencies, more liquidity fragmentation, and more need for intermediaries.

New technology - including distributed ledger technology (DLT)/blockchain, smart contracts, and digital assets - offers an opportunity to reinvent transaction banking and payments and meet the dynamic needs of the digital, global economy, but their success and widespread adoption hinge on the implementation of open interoperability standards - which are a crucial characteristic of the Fnality Global Payments’ architecture.

Open and common interoperability protocols, neutral to the underlying technology, will enable the data represented across different DLTs to be shared and atomically settled with many parties, in a safe and reliable manner.

There are four main components that make the Fnality Global Payments the game-changer, really unlocking the potential of tokenised markets:

Fnality together with its backers (global banks and FMIs) is setting the standards for such an interoperable and universal payment rail. The interoperability protocol will be open source, driving adoption by other industry stakeholders for the DvP settlement of securities and other digital assets across DLT platforms. Fnality’s protocol will be also compatible with centralised systems.

Atomicity between the payment leg (Fnality) and any digital asset leg is guaranteed without settlement risk; both payment and asset will move simultaneously & in a programmable way (i.e. through smart-contracts). According to the BIS, an atomic swap of one leg occurs ‘if and only if’ the other leg does so too: in other words, either both sides happen, or neither does. Doing that offers the benefit of critically reducing the risk of a counterparty being unable to meet its obligations (enabling a reduction of settlement risk, or Herstatt risk in case of cross-currency swaps): this will unlock risk capital that will instead be able to be used for further business cases.

Distributing the processing required to settle transactions across several participants that run the nodes and maintain the FnGP network, and validating these transactions through a consensus protocol, achieves not only near real-time settlement, reduces the need for intermediaries and removes single points of failure. This means that even if several participants were to fail, others would be able to maintain the integrity of the system.

The Fnality settlement asset is of the highest order, comparable to central bank money.

Participants use pre-funded settlement balances in an account directly at the central bank to make wholesale payments in real-time with near-instant settlements.

Regulated financial institutions can fund a bankruptcy-remote central bank account in each jurisdiction where their funds are “backed” 1 - 1 with real money in the local fiat currency, thus “pooling” liquidity in a single pot.

Every single point of liquidity (one in any currency) interoperating with each other will deliver the universal collateral pool bringing real dynamicity and atomicity at a global scale.

Innovations in financial markets, such as automated execution in today’s markets and the development of asset tokenisation initiatives, require a complementary back-end revolution. We in Fnality, together with our shareholders, have initiated to revolutionise the landscape, and this will become apparent from the end of 2022. Watch this space...

By creating a network of interoperable and fully regulated payment systems, Fnality is delivering the institutionally trustworthy universal payment rail that can be used for any payment scenarios which require 24/7 usability, speed, security and operational simplicity.