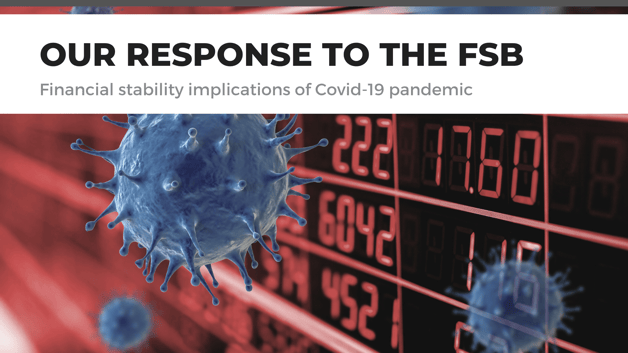 On July 15th, the Financial Stability Board delivered a report to Finance Ministers and Central Bank Governors of the G20, in which they examined policy measures implemented by G20 economies in response to the threat the virus has posed and continues to pose to financial market stability.

In the report, the FSB stated that large-scale Central Bank liquidity support was instrumental in alleviating the acute stress that key funding markets experienced, including US dollar shortages, the movement of investor capital to safe haven assets, and credit provision to the real economy. Despite this, the FSB also suggest that improving market sentiment since April may not accurately reflect the ongoing threat of the pandemic, particularly given that the path of recovery remains highly uncertain.

At Fnality International we believe that a decentralised Financial Market Infrastructure (dFMI), facilitating instant, final settlement of payments on a global scale would have made the scale of the macroeconomic shock caused by Covid-19 less pronounced, and that it would also aid in the mitigation of ongoing financial market stability concerns. 3 key ways in which a dFMI - such as a Fnality Payments System (FnPS) - can achieve this are:

The Central Bank liquidity support that was provided in response to the initial Covid-19 shock was extensive. As the FSB notes, this included measures to ‘alleviate US dollar funding shortages’, and to ‘alleviate funding constraints from the shift of investors to safe assets’.

A network of jurisdictional FnPSs, empowered by a Central Bank money backed settlement asset would provide the ability to move cash on an instantaneous or same-day basis without settlement or credit risk. The wide-ranging benefits of this are explored further in our ‘Fnality Narrative’ document, but it should be noted that there are clear benefits for Central Banks in addition to financial services actors.

The USD funding shortages that the FSB note in their report could be mitigated if there are more options for short term, intraday funding beyond repos and unsecured lending. FnPS will provide a T+0 settlement facility for FX transactions. Moreover, these transactions will be free of counterparty risk, and backed by balances held at Central Banks rather than at commercial institutions. It can be anticipated that these innovations supporting increased liquidity and reduced risk will also lead to an increased willingness to lend through FX operations in times of market stress.

Broad participation in such a system providing a wider, safer range of refinancing options would thus reduce the need for Central Bank liquidity support. Participant Central Banks would also benefit from greater macro and individual level visibility over market activity, facilitating proactive intervention in the early stages of such a crisis - or even before it takes hold.

The FSB state that if the ‘usability of capital or liquidity buffers’ were clearer and more flexible, financial resilience would be enhanced.

Alongside drawn out settlement processes, banks are also challenged with liquidity constraints and the increased fragmentation of liquidity across each jurisdiction. The global, instant settlement capability referred to above has the tripartite benefit of interoperability between cash in multiple currencies, real time visibility of liquidity across cash and collateral, and reduced intraday liquidity buffers - to the extent that there may be little need for intraday overdrafts. Each FnPS will act as a ‘single pool of liquidity’ for participant banks, who will thus be able to use their liquidity much more effectively, increasing financial resilience in the process.

The cost savings that come as a result of the aforementioned risk reduction and reduced liquidity buffer needs may give banks more to work with in supporting the real economy, and emerging tokenised markets are increasingly being seen as an area of key focus in achieving real economy financing. The Central Bank money backed settlement asset that is native to all Fnality Payment Systems will be a key enabler for the settling of tokenised value transactions with finality, and the interoperability capability inherent in DLT will allow each FnPS to act as the ‘cash leg’ for any transaction within tokenised markets.

As the FSB stress in their report; ‘the risk of further liquidity stress requires continued vigilance’. At Fnality International, we are building a series of payment systems in multiple jurisdictions, each overseen by its national Central Bank. The nature of Distributed Ledger Technology (DLT) that underpins each FnPS is such that it enables true peer-to-peer, immediate settlement across multiple jurisdictions and business platforms. The disruption that Covid-19 has wrought on the world has been such that effects on global financial markets were inevitable, but the breadth and depth of these effects could perhaps have been less pronounced, and the mechanisms for Central Bank intervention made more effective if market visibility were increased and wholesale markets were smoother, faster, and safer.