On the UK House of Lords Economic Committee meeting on CBDC 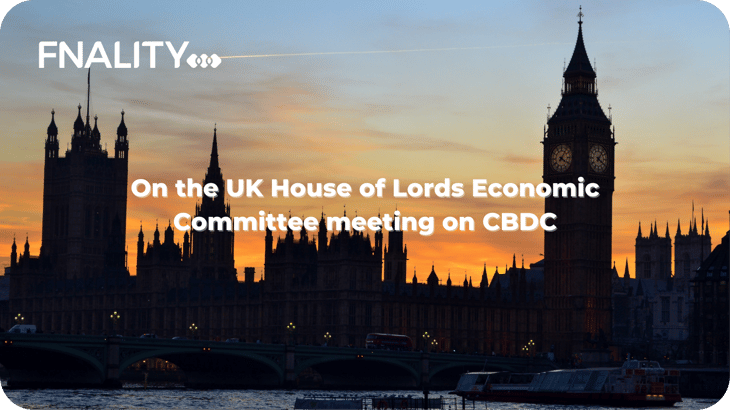 At Fnality, we are often asked questions along the lines of 'How would new forms of digital money alter your value proposition?’ or 'Where does Fnality 'fit' in a future world with CBDC?'

In a previous Fnality Insights paper, we have suggested that:

When asked whether the BoE was considering a wholesale CBDC, their responses dismissed such a prospect in the UK and validated our previous reasoning, articulated above. Sir Jon summarised this point by saying:

'Wholesale is more about can we use this technology [DLT] to be more efficient? The RTGS renewal that is being planned will have the ability to dock into a distributed ledger technology. It will not be a distributed ledger itself, but it has been designed so that it could interface with DLT systems, if that became necessary. When people ask me, “Why are you not doing wholesale?“, the answer is that we have wholesale. Technological changes may be needed. The private sector is working on this, and we are working with it.'

Sir Jon’s comments on working with the private sector were further clarified elsewhere as referring to the Bank’s recent publication of their Omnibus Accounts policy.

He said; 'The Bank published a paper on omnibus accounts, which would enable the banks that currently have access to central bank digital wholesale to use a digital coin between themselves and then the omnibus account would settle with the Bank of England... There are a number of proposals around to do precisely that as a way to introduce the technology on the wholesale side, and we’re working with them.'

As we have shared previously, Fnality is the first organisation to apply for this new account and is working towards completing all the necessary requirements to getting our account operational in as short a timeframe as the Bank of England will allow.

While there remains interest in the pursuit of a wholesale CBDC amongst some public sector actors, we continue to be aligned with them in recognising the criticality of wholesale payments to the global economy, and have taken significant steps towards creating a live, global network of payment systems that both fulfils the aims that wholesale CBDC arrangements seek to achieve and offers novel solutions to those that they do not. In the process of doing so, we will unlock novel benefits that would otherwise remain unrealised.

This most recent development is a clear validation of this critical element of the Fnality vision.