In wholesale banking, liquidity makes the world go round 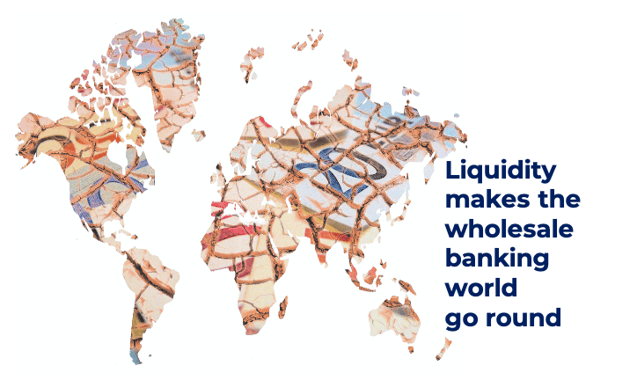 In wholesale banking, liquidity makes the world go round.

Liquidity, or rather the lack thereof, was a major factor in the collapse of Lehman which triggered the Great Financial Crisis (GFC) of 2008, and liquidity concerns have dominated the regulatory agenda ever since. We at Fnality International believe that it is of paramount importance for a “liquidity” lens to be applied, when designing the financial markets infrastructure (FMI) of tomorrow that is being built on distributed ledger technology (DLT). Infrastructure is by its nature foundational; the work we do now will impact financial market participants for the next 50 years.

Increasingly prescriptive regulatory standards have been set by the Basel Committee on Banking Supervision (BCBS), beginning with the 2008 Principles for Sound Liquidity Risk Management and Supervision(see BCBS 144) and followed in 2013 by Monitoring Tools for Intraday Liquidity Management(see BCBS 248). The latter’s quantitative measuring and operational requirements hit banks hard through the introduction of increased capital requirements in order to support the intraday liquidity buffers, under Basel III’s Pillar 2 requirements.

There is surprisingly little coverage of the financial and liquidity impact of these requirements. Large banks have an average of USD 100bn in liquidity buffers(See Wyman, 2018), with global systemically important banks (GSIBs) at some USD 237bn. Of that, between 10% and 30% is required to support intraday movements created by the complexity of fragmented liquidity and a reliance on intermediaries. Every 1% change in the intraday liquidity buffers is worth at least USD 10mn. Just for the 30 GSIBs, that “liquidity cost” is between USD 7bn and USD 21bn, per year.

What’s it worth to you? Please use our calculator to work out what’s in it for you to pay attention to intraday liquidity costs. If you know your liquidity buffer size, we’ll show you what every 1% reduction in your intraday buffers is worth to you. The link to the calculator is below (in the graphic) and again at the end of the article. 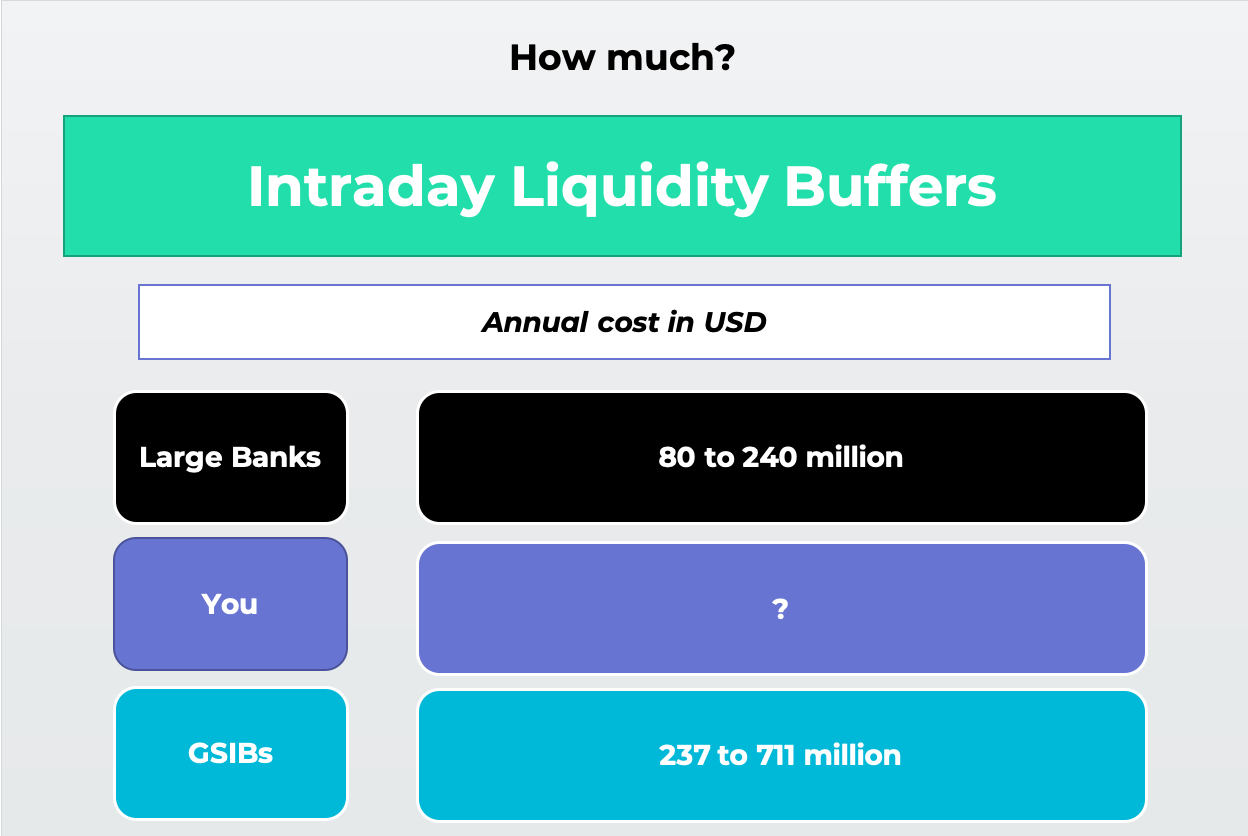 If, as an industry, we are to successfully adopt DLT and fully realise the associated operational process benefits, then it becomes critical to solve the challenges around money and collateral in a planned and systematic way. To use the words of the Bank of England’s Sir Jon Cunliffe: “Money, like electricity and water, is crucial to the operation of a modern society.”

We see it as important to understand the “what” of the status quo, before turning to the “how” of tomorrow and also the “who”.

In our current FMI and settlement landscape, liquidity is fragmented in large part across standalone institutions that require discrete funding. Securities settlement is separate from payments and from FX, with each of those in turn being further fragmented.

The settlement processes in the wholesale sector of banking are highly reliant on a network of correspondent banks, also known as nostros, or transaction banks. Central banks refer to this as tiering. There have been two drivers of complexity in this area: local access rules where regulators limit who can be a direct member of an FMI, as well as a lack of interoperability between settlement venues which results in fragmentation of cash across multiple separately funded settlement accounts.

The international central securities depositories (ICSDs), such as Euroclear and Clearstream, are exceptional in that they allow for a broad range of direct participants. CLS Bank, the international FX settlement facility, has extremely limiting membership criteria. As a result, the approximately 25 000 FX market participants are reliant on the third party services offered by a mere 12-15 of the 66 direct settlement members in order to access CLS.

This is a highly intermediated and inefficient market structure that results in money and collateral being fragmented – and the status quo is heavily reliant on those intermediaries providing credit and liquidity to their clients, representing increased and undesirable systemic risk. Post-GFC, the risks associated with “tiering” are increasingly at the forefront of regulators’ minds, particularly with respect to the systemic risk associated with any significant change in the willingness of those intermediaries to continue offering their services, or in the event of a service disruption.

So, we have a creaking and highly risky existing infrastructure. We also have the new capabilities for tokenisation that are afforded by DLT, and a range of new exchanges and price discovery venues that are springing up to support tokenised assets. Plus we know that full settlement on ledger cannot be realised until both the security and payment legs are on-ledger.

The current highly intermediated approach works only because correspondent banks and custodians are both willing and able to offer unsecured intraday credit facilities. As we have seen, the side-effect of this dependency is the cost in terms of intraday liquidity. And systemic risk concerns are real: if there is a market crash, as we are experiencing in the wake of the COVID-19 pandemic, those intraday facilities, which are uncommitted and unadvised, might not be so readily available. Unsecured funding is a risk.

How can we use tokenisation to solve these problems? We believe that the tokenisation of cash, and creation of cash-on-ledger, as it were, opens the door to myriad instantaneous or same-day settlement solutions that can eliminate the need for costly and inefficient intermediaries, and significantly reduce the level of systemic risk inherent in the current market structure. Furthermore, we also believe that any successful system designed to safely, transparently and compliantly solve the problem of cash-on-ledger in wholesale markets must exhibit two behaviours. Firstly, a common issuer or system must exist – one which is highly regulated, widely trusted and poses a low level of credit risk. Secondly, the solution must be “as close to cash as possible”, in that it must exhibit as many traits of fiat money as possible.

So tackling the first question – how do we set up this “common issuer”?And how do we do this whilst recognising the need for interoperability across the many different DLT platforms used by financial markets participants (e.g. R3’s Corda, IBM’s Hyperledger, Ethereum and many others).

We believe that this can be solved through the creation of a payments system that allows many applications or business platforms to use balances held on its system, so that there is no new fragmentation introduced across multiple platforms.

Imagine there is a new payment system with a Red Token, 100% backed by fiat collateral. 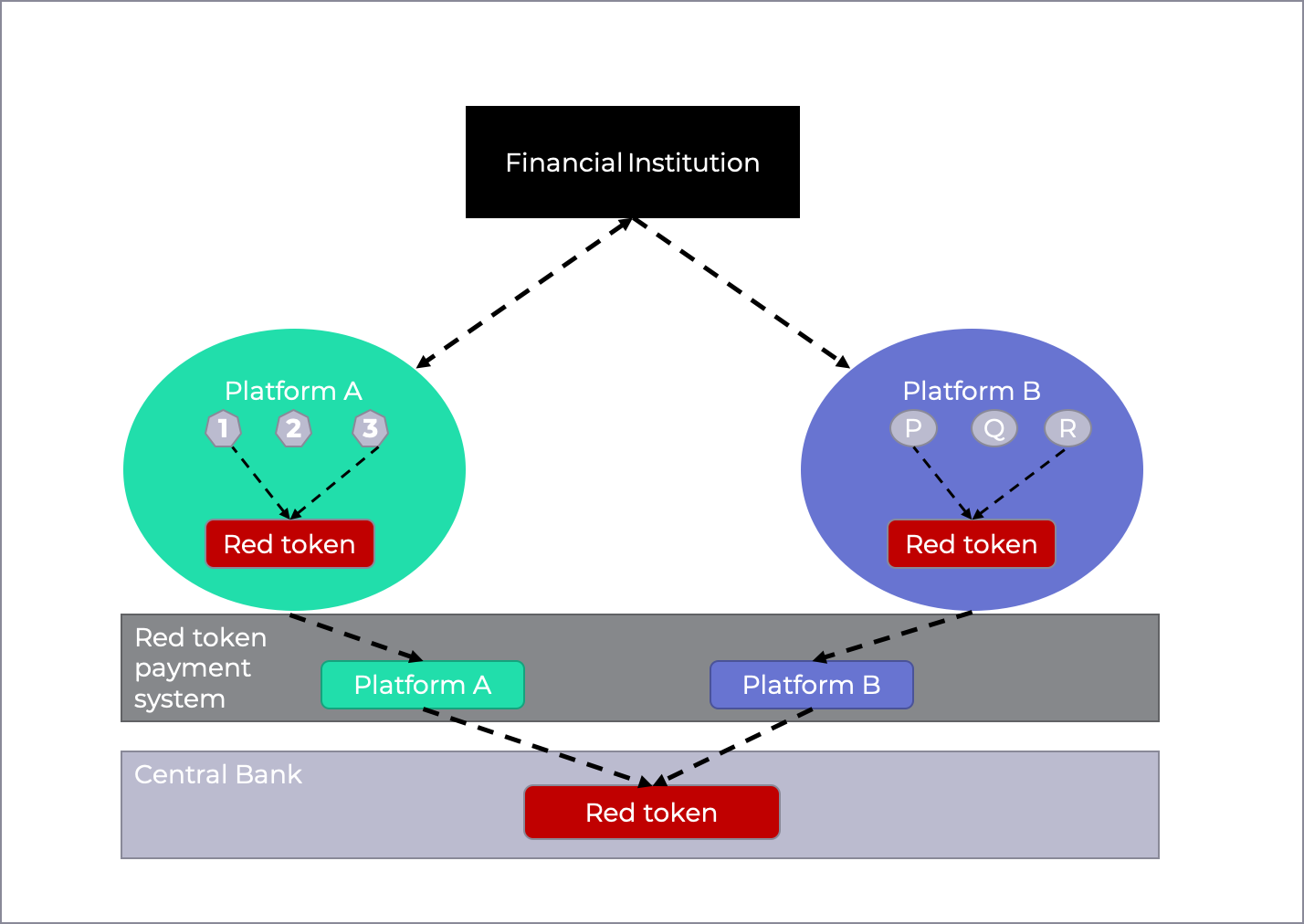 As soon as the token is locally stored on a platform, it fragments liquidity for any Financial Institution using applications on more than one platform, cf. Figure 1.

Even if this token is used consistently across multiple platforms, liquidity is still fragmented. This would simply replicate the status quo with a fiat-based payment system.

It might work and be effective, but it would not be efficient. FI’s would have a lost opportunity cost; the potential savings from reduced intraday liquidity buffers.

A significantly more efficient alternative would be to have the FIs hold their balances directly in the “Red Token Payment System”. This prevents fragmenting liquidity.

If the Payment System can allow many applications or business platforms to use balances held on its system, there is no fragmentation.

A Financial Institution can now have a single pool of liquidity, cf. Figure 2. 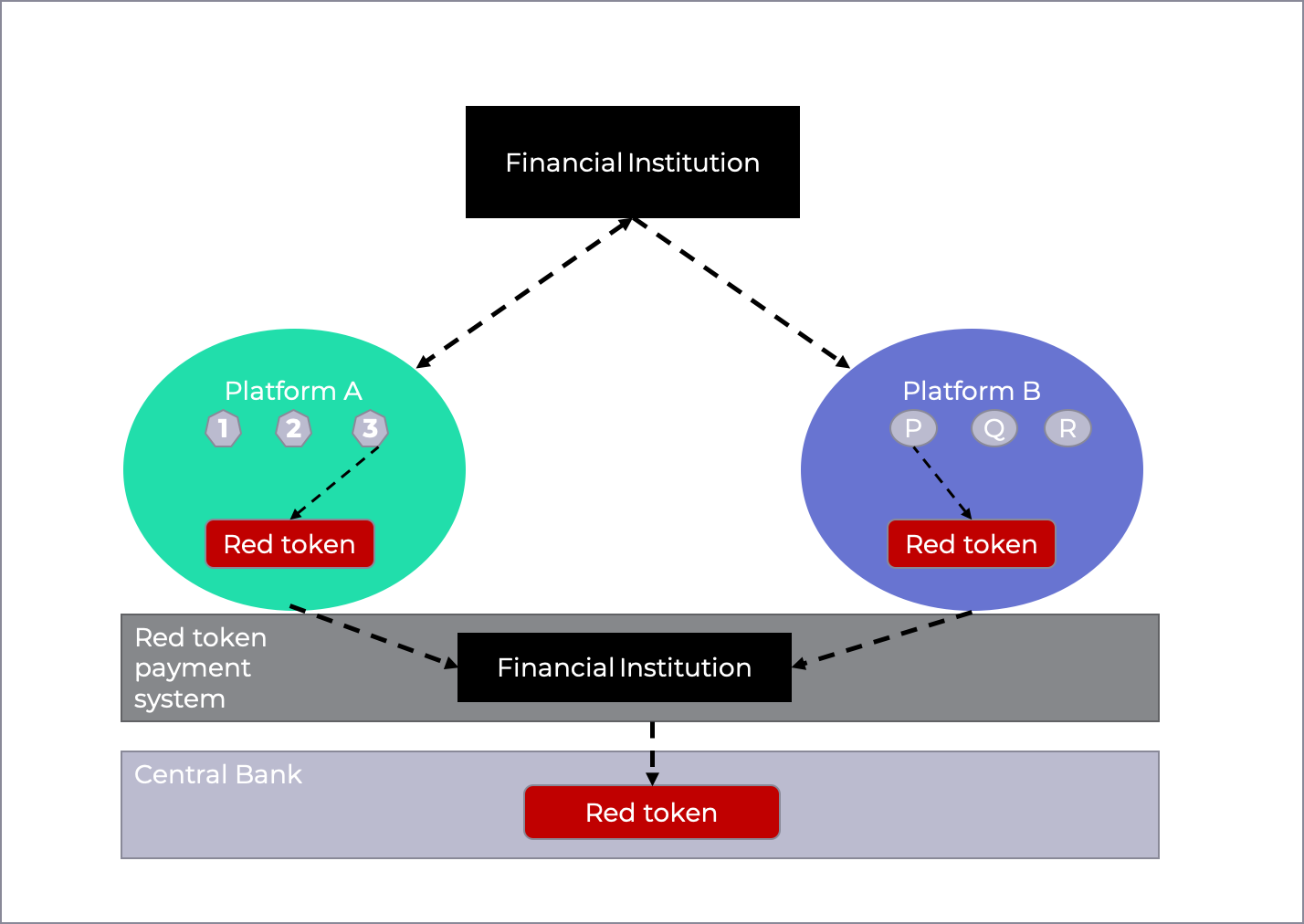 This approach also enables and creates incentives to connect both securities trading and settlement platforms, as well as FX ones, to a single pool – effectively creating a single global collateral pool! This is the holy grail for liquidity.

Finally, who should be the provider or operator of such a payments system? If what is described above were to be provided by the private sector, it would broadly represent what the IMF described as synthetic central bank digital currency (CBDC) in its 2019 paper, “The Rise of Digital Money”. If the provider were the public sector, for example, the central banks, then we would perhaps have a wholesale CBDC.

In either case, even if we can agree that one common tokenised payments mechanism for cash-on-ledger is a good thing, there is significant work to be done. The means of payment needs three component parts:

Fnality International was established with the will and intent to cover all of the needs cited above. We are backed by 15 of the world’s largest financial institutions, and are working with a number of central banks to develop solutions for CAD, EUR, GBP, JPY and USD, with other currencies to be added in the future. Our global footprint means that we have the support of local banks in each of those jurisdictions, and this gives us a strong understanding of the need to be able to solve for the cross-border aspects of payments.

Fnality Global Payments (FnGP) will comprise a series of national systems, each regulated in its home jurisdiction. We call each of these a Fnality Payment System (FnPS). In each system, balances are fully pre-funded by transfers of fiat currency. At all times, the settlement asset is 100% backed by fiat collateral held with a central bank. The Fnality Payment System does not extend credit in any form. Interoperability will allow each payment system to act as the settlement/payment asset for any Payment (P), Delivery v, Payment (DvP) or payment vs. payment (PvP) need.

Fnality's capabilities will enable some important things to happen:

Secondly, it will enable us to design our infrastructure in such a way as to avoid today’s problems around fragmentation of liquidity. Each Fnality payment system will represent a single pool of liquidity. Combined with the collateral management capabilities offered by tokenised assets (especially for high quality liquid assets, or HQLA), we will finally have a global collateral pool with the capability to move collateral on a same day basis without settlement or credit risk.

The key to better liquidity management is inter-operability. The Fnality Global Payment proposition allows one cash asset, USC, to be connected to many platforms and business applications. This is one part of finding that holy grail; the other is platforms such as HQLAx, where HQLAs have been tokenised. Other emerging platforms of note include Finteum, which aims to improve intraday liquidity trading in a central limit order book and Adhara, which uses an RFQ process. Fnality has done a proof of concept with both to show how FX orders can be pre-cleared and then settled immediately upon execution.

Thirdly, the technology will enable new ways of meeting financial obligations; this is the promise of the 'smart contract'. Fnality’s payment capability will be an essential ingredient in leveraging that capability and potential of DLT.

So, as we begin to plan, design and build the financial markets infrastructure of tomorrow, we want market participants to understand how liquidity solutions such as those discussed here can tangibly, materially benefit them. Use our liquidity calculator to see the difference it might make to you. 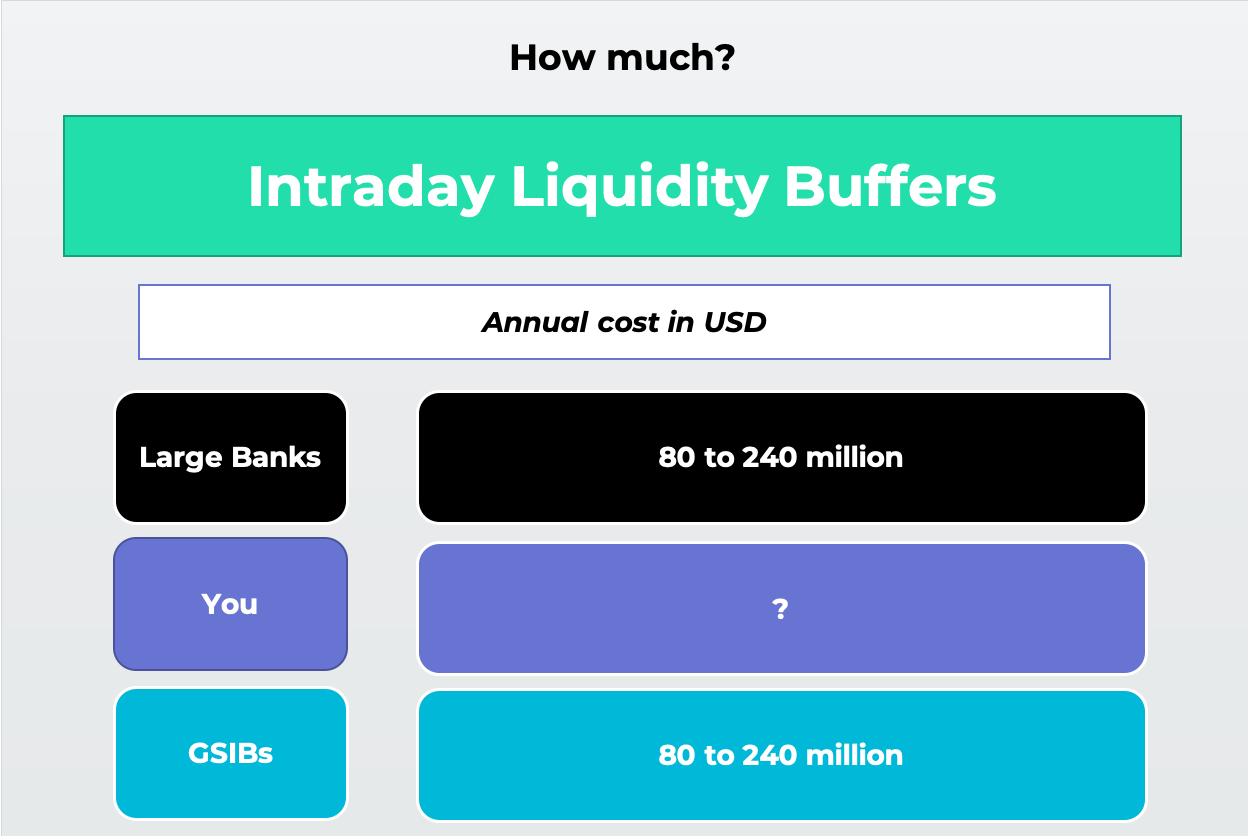 Olaf is an expert-generalist in Financial Services matters. He brings a wealth of experience of the full front-to-back and end-to-end impact of bank operations. He is able to identify the target operating model and design the business architecture to deliver optimal processes and customer experience; building the best processes; delivering on the three key dimensions of operations: Control, Capacity, and Cost.