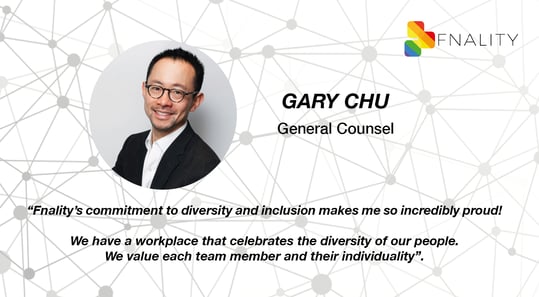 As we conclude the Pride month celebration, our General Counsel Gary Chu tells us about his experience in Fnality and his personal career.

As a gay man, I find it amusing just how quickly Pride has gone from the social fringes to mainstream. June is now Pride month: not just a reason for activism and parties within the LBGTQ community, but also a time for employers and straight allies to stand in solidarity with us.

To be clear, Fnality’s commitment to diversity and inclusion makes me so incredibly proud. We have a workplace that celebrates the diversity of our people. We value each team member and their individuality. The fact I happen to be Asian, an immigrant and gay makes no difference to how I am treated, but it makes a difference to our work because it enables me to contribute a unique perspective. I feel comfortable being myself at work. Indeed, it is a far cry from the institutionalised homophobia at my all-boys high school, and the reservation I had about being out when I first entered professional life 15 years ago.

Since the first Pride parade in June 1970 (commemorating the Stonewall riots the previous summer), the lives of queer people in many parts of the Western world have improved significantly. Homophobic attitudes are no longer tolerated by a large part of British society. Same sex marriage has been legalised in 29 countries (including in Australia, where my partner and I have familial roots). A couple of weeks ago, the US Supreme Court – led by a Conservative judge appointed by the Trump administration – ruled that workplace discrimination against gay and trans people violates the US Civil Rights Act.

But prejudice against queer people is still very real, especially against trans and gender-fluid people. Even in my gentrified East London neighbourhood, it exists. On a couple of recent occasions, my partner and I faced homophobic abuse from passing drivers while we kept to ourselves on our daily state-sanctioned walk. Sadly, such incidents are a fact of life for many queer people.

A story I will never forget is one told by Magda Szubanski, an Australian actress and comedian, during the divisive public debates in the lead up to the Australian marriage equality vote in 2017. "A friend of mine... her long-term partner had cancer. She wanted to be in the room with her when she was having a painful treatment and the doctor said, 'next of kin only. Parents, siblings. No spouses.'" She added: "She wasn't allowed in and she had to stand outside and listen to the screams of the woman she loved unable to even comfort her. Now, in whose universe is that fair?"

This is why Pride is so important. And I’m glad the straights have jumped on the bandwagon too because ultimately, queer people just want the same as everyone else: to be treated with the same human dignity.

Gary Chu is the Legal Counsel for Fnality International