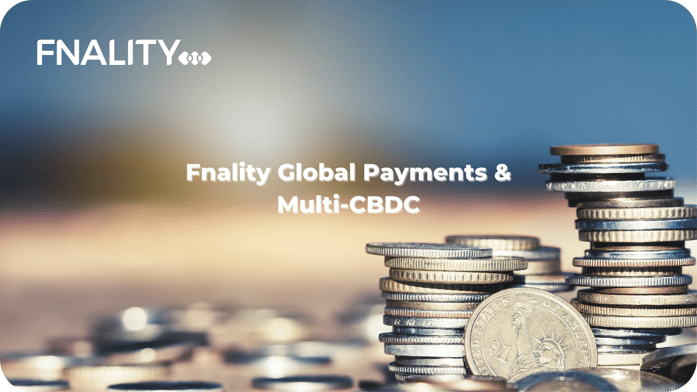 In that paper, we argued – amongst other things – that wholesale CBDCs that are designed and issued independently by individual central banks might find difficulty in leveraging cross-border use cases, including multi-currency Payment v Payment solutions. Different jurisdictions operate under different legal regimes; agreeing on a coordinated system of oversight would certainly not be simple given central banks’ strong desire to maintain complete control over access to and usage of their own currencies. However, such coordination is vital to achieving wholesale CBDCs’ promised benefits of faster, cheaper and safer payments on a cross-border basis.

In a recent paper the BIS recognised this and offered new proposals as to how cross-border, cross-currency CBDC payments might flow, terming such arrangements where multiple CBDCs interoperate ‘multi-CBDC’ or ‘mCBDC’.

Compatible CBDC systems, the BIS argues, can reduce frictions and barriers to a range of cross-border and cross-currency services. Commonalities across jurisdictional CBDCs in the areas of technical standards and legal and regulatory regimes stand to simplify onboarding and operational processes. However, the BIS also notes that achieving such coordination, especially without the guidance of supranational frameworks, can take many years, highlighting the examples of the common messaging standards of ISO 20022, and the legal harmonisation efforts of the Single Euro Payments Area (SEPA).

Interlinked CBDC systems would benefit from a shared technical interface, backed by contractual agreements that enable participants in one constituent system to make payments to those in another. Deeper system linkages in the form of a common clearing system with designated settlement accounts that may even allow participating central banks to hold the CBDC of other central banks on a reciprocal basis could also streamline current state processes. However, the coordination required to align the many stakeholders and participants involved (the burden of which the BIS rightly note compounds with each CBDC added) and the technical expertise required to implement such a system with the appropriate safety, scalability and resilience characteristics would both be significant and come with substantial risk.

Integrated mCBDC arrangements would comprise a single multi-currency system with several CBDCs onboarded onto it. Participating central banks would agree on a single rulebook, a single set of participation requirements, and a single underlying technical infrastructure. The BIS argue that integration at this level of depth and sophistication would allow for greater operational functionality and efficiency gains, but would also increase the governance and control hurdles (e.g. access criteria) inherent in mitigating the risks of such a system. Indeed, the monetary policy and financial stability implications of such a system could be substantial, and would certainly differ from jurisdiction to jurisdiction depending on the specific national and international environments that each participant central bank is operating in. In an integrated mCBDC schema, participating central banks would certainly need to relinquish some control over governance arrangements, technical infrastructure, and/or overall system oversight.

Nonetheless, an example of a proposed mCBDC solution utilising the integrated model can be found in a paper recently published by Monetary Authority of Singapore (MAS). MAS argue that ‘mCBDC arrangements are most effective and efficient if the multiple CBDCs are hosted on the same infrastructure and platform’. They immediately proceed to highlight the core challenge identified above; ‘this runs into a significant governance challenge: some central banks will be unwilling to share their CBDC infrastructure with certain other central banks, and some central banks may not be willing to share their infrastructure with anyone at all’.

For MAS, the solution is to ‘unbundle’ the technology stack to offer distinct and granular control arrangements at each layer of the ‘digital currency stack’ (see below), much in the same way that cloud service providers segregate individual layers of their offering for user customisation purposes. Such an arrangement, MAS argue, would provide the discrete governance that central banks require to consider an ‘integrated’ mCBDC arrangement utilising a common platform. This is an approach clearly derived from MAS’ experience of Project Ubin, in which a common platform was utilised for multi-digital currency settlement.

MAS rightly note that the retention of control over the issuance of a CBDC (i.e. control over the creation and destruction of their own currency) is a highly sensitive issue; one which ‘central banks have a strong preference to maintain complete control over’. They allow for this in the ‘currency’ or ‘CBDC layer’ (in red above) of their digital currency stack, and argue that the sensitivity and thus level of direct control required decreases from the ‘CBDC layer’ down to the ‘common platform layer’, which they envisage being cooperatively owned by, or operated as a service to the participating central banks.

However, governance challenges remain. A key area in which a ‘common platform’ approach faces difficulties is settlement finality. Settlement finality is a conceptual construct often used in statutory, regulatory, and contractual literature. Finality of settlement ensures that transactions made over payment networks will, at some point, be complete and not subject to reversal even if the parties to the transaction go bankrupt or fail. In the case of a DLT-based payment system (as many proposed mCBDC arrangements including MAS’ are), settlement finality is derived from and guaranteed by the deterministic consensus methodology that underpins it. Applying MAS’ framework, this consensus methodology resides within the ‘common platform layer’ (in blue above), yet is a highly sensitive and jurisdiction-specific element of any payment system – one that is likely to elicit the very same desire for direct control from participant central banks as the creation and destruction of their own currencies does.

Perhaps it is because of this that MAS concede that ‘while the model of mCBDC on a common platform shows promises, it is unlikely that the world will land on a single common settlement platform’. The difficulties inherent in inter-central bank coordination – particularly in the novel area of DLT-based payment systems – are substantial. From a technical perspective, where concerns around single points of failure and resilience are high, getting central banks and regulators in multiple jurisdictions comfortable with the use of a single common platform would be a massive undertaking. An additional challenge can be found in the sprawling specificities inherent in central banks’ desire for control, governance and oversight over their currencies and how they are used.

We believe that our series of local Fnality Payment Systems (FnPS) – perhaps most closely aligned with the interlinked model as described by the BIS – is best placed to address the legal and governance issues that are a primary and jurisdiction-specific concern of central banks and regulators, while achieving a secure and resilient solution.

With respect to legal and governance concerns, we have studied and understood these jurisdictional specificities in collaboration with central banks and regulators, and have architected our series of local FnPS to achieve both local oversight and international harmonisation. The issue of cross-border, cross-currency interoperability is solved without the need for cooperative management of the payment system across borders (with all of the difficulty around jurisdictional specificities that that entails), but rather by giving each central bank appropriate oversight over their local FnPS, each of which is a part of a broader, coordinated whole – Fnality Global Payments (FnGP) – supported by a common interoperability protocol and internationally harmonised jurisdictional Rulebooks. Each central bank will retain control over the issuance of its currency, the access criteria that surround it, and the settlement finality regulations that ultimately determine how and when transactions become final and irrevocable.

On security and resilience, it stands to reason the difficulty of attacking multiple independent systems is greater than attacking just one. Each Fnality Payment System relies on a private, permissioned distributed ledger network that is operated by regulated financial market participants and overseen by competent regulatory authorities. When taken together as FnGP, this is significantly more distributed than a single ‘common platform’. FnGP involves not just a diversity of multiple independent systems, but also a diversity of other features such as location, power sources, hardware, operating systems, software implementations of the DLT protocol, and so on. Fnality will measure the diversity of the Validator Nodes on each FnPS with a 'diversity score'. Any new FMIs should aim for greater resilience than those already in operation, and diversity is a significant weapon in Fnality’s resilience armoury. More information on security and resilience in Fnality Global Payments can be found in another paper from our Insights series: Resilience in Fnality Global Payments.

Although it is not a CBDC arrangement, many of the proposed benefits of wholesale CBDC arrangements will also be delivered by Fnality Global Payments: increased efficiency and resilience, real time settlement with finality, enhanced support for PvP with reduced settlement risk, and support for existing and emerging DvP use cases. Accordingly – and much like proposed mCBDC arrangements – FnGP seeks to offer significant improvements in the speed, cost and transparency of cross-border payments, facilitate a reduction in risk – be it settlement, replacement cost, or credit counterparty risk – offer 24/7 availability, and enable near-instant PvP settlement on a cross-border basis.