DLT has promised much with many false dawns over the years. One thing we can be very sure of is that the benefits, when they come, will be far reaching.

The adoption of DLT based systems in Financial Services is, ironically given its genesis, also moving slowly. Forecasts about streamlining post trade, T+0 settlement, tokenised asset classes and Central Bank Digital Currencies have proved to be way off.

However, Fnality has been steadily making progress towards settling payments and is, perhaps, one of the four or five DLT projects that are worth tracking at the moment. This is because Fnality has many years behind it; the sponsors really understand how Blockchains will help with their strategic objectives and Fnality has funding for many years ahead. It is not a bad bellweather for cutting through the froth and the hype.

In terms of what Fnality does, we can say that if the three uses of money are:

Then the Fnality Payment System (FnPS) is primarily focusing on the last one. In a nutshell it uses a digital form of a currency to settle wholesale payments with real-time finality.

The FnPS uses a settlement asset based on a DLT. With many payment options already available, the obvious question is then why use this?

Commercial Bank Money. This is where a customer has a balance at a financial institution. For example a member of the public having a current account at Lloyds.

Central Bank Money. This has two main forms: cash - notes and coins issued by the Central Bank and Reserve Accounts which allow a small number of organisations to keep money at their domestic Central Bank e.g. the Bank of England.

Each of these types represents a claim on the issuer (Lloyds or the Bank of England respectively). The claim is only as good as the viability of the institution you have a claim against. As the claim against the Central Bank is the lowest risk possible, you might call Central Bank money the “good stuff”!

The debate on who should have access to Central Bank money has been simmering for decades if not centuries. Currently, in its physical form (aka cash), everyone has access. However, it is unwieldy especially for large amounts. Having said that global demand has actually been increasing (see below). In electronic form, it is restricted to tightly regulated entities who then pass it on as Commercial Bank Money. 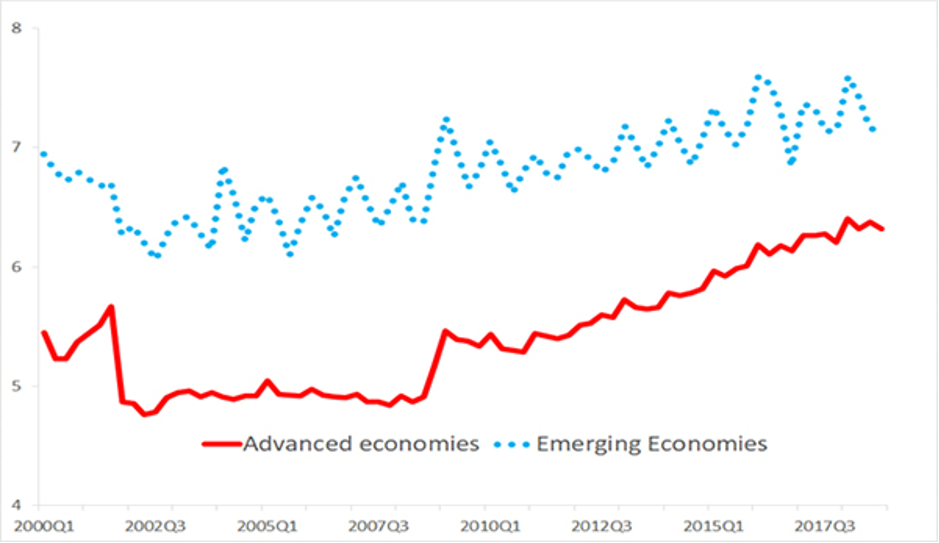 Cash in Circulation as a Percentage of Nominal GDP (%)

If you look at what happens when Alice, banking at Lloyds, makes a sterling payment to Bob, banking at Barclays, (e.g. through the Lloyds internet banking portal) you can see how the two types logically interact. Firstly Alice’s Lloyds account is reduced or debited; the Lloyds reserve account at the Bank of England is debited; then the Barclays reserve account at the Bank of England is increased or credited; and finally Bob’s account at Barclays is credited. This is the simplest type of payment - more complexity is added if the payment was in dollars (correspondent banks are involved) or was dependent on some other action like the delivery of an asset - but even in the simplest form we can see at least two problems:

Taking it right back to first principles, the best form of payment occurs directly between bearer instruments. For example, where Alice gives Bob a five pound note.

Atomicity. This payment is as atomic as it gets (it has either happened or not depending on who is holding the note - ignoring the moment where they are both holding it). Bearer instruments have considerable Operational Risk though - you could be robbed or the note could be forged - and so are less practical. Unfortunately, the alternatives, electronic payments, require an ability to “keep track of things” i.e. a register of who owns what. To date this register has always been held by one or more neutral or trusted parties. Trusted because the payments may be between parties actively working against each other. Generally the more trusted parties involved in a payment the less atomic it is. In the first example there are, depending on your perspective, three: Lloyds, Bank of England and Barclays.

Finite time. The payment is about as instant as it gets. The transfer of value to Bob is as quick as Alice can let go and Bob can take it. Typically the more atomic a payment is the faster. Or to put it another way the more sequential parties involved the slower the payment is as each party has to execute its steps with all the possibility for mistakes and exceptions (that need fixing) along the way. It also would not be too much of a leap to say the fewer parties involved the lower the cost of the payment.

So we can see this kind of peer to peer payments are the best but are unfortunately impractical in the real world.

A blockchain based settlement asset on the other hand can enable many of these properties.

Blockchains have many benefits for example transparency and consensus. The one we will focus on here though is the ability to transfer value between regulated and therefore “somewhat untrusting” parties. Transactions on private Blockchains are typically both atomic in that they are done or not done (they even avoid having both parties holding the bank note) and quick with transactions taking a couple of seconds depending on how the network is configured.

Imagine a world where it is possible for untrusting parties to make payments using Central Bank money directly to each other transparently, atomically, instantly and without any intermediaries. This is the promise of an RBDC.

As with most DLT based initiatives, it is likely the benefits start in cost and risk reduction but eventually it is also likely these will be dwarfed by the new revenue streams that use a RBDC as foundations.

These amount to a compelling case for doing things differently with the cost savings and risk reductions alone adding up to 100s of millions a year.

A note of caution, however, is that the technology, while interesting, is the relatively easy part. Cross industry transformational change and building new Distributed Financial Market Infrastructure blessed by Central Banks and other regulators is not easy. Only fully regulated systems will be successful.

So where are we now?

While many Central Banks have been taking their time investigating CBDCs, there have been speeches recently from the Bank of England and the UK Chancellor that may point at least to a GBP CBDC in the near future. If that is the case then 2021 could be the start of something interesting for CBDCs and payments in general and Fnality in particular.