The Importance of Nodes in the Fnality Payment System 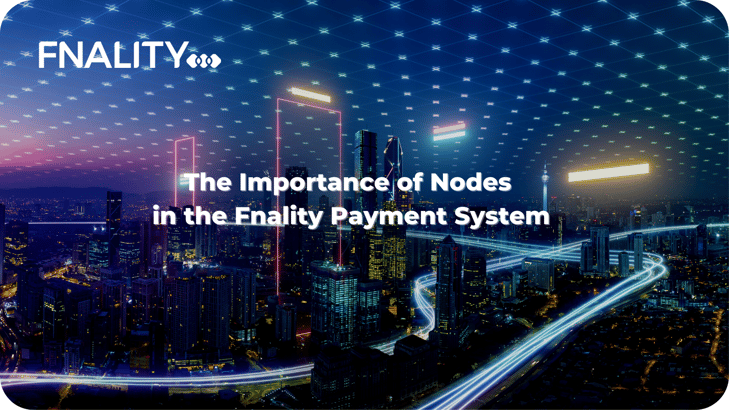 Traditionally, the functions of financial market infrastructure (which includes payment systems) have been centrally administered and operated by a single entity. There is a growing movement within the wholesale financial market towards decentralisation in order to reduce reliance on centralised intermediaries and “unlock billions in capital and liquidity”. Decentralisation is at the core of our design principles at Fnality. Both the technology underpinning the Fnality Payment System (‘FnPS’) and our organisational design are based on the concept of decentralisation. There will be no ‘single point of failure’ should a server go down or ‘single point of attack’ from malicious actors targeting the FnPS. This is primarily due to the underlying blockchain technology and the distributed network of nodes. This blogpost will provide a high-level overview of the importance of nodes in the FnPS. By understanding the fundamentals of nodes, the benefits of decentralisation will become apparent.

What are blockchain nodes?

In simple terms, blockchain technology records the steps in calculating the current state of the ledger from an initial state (genesis block). The blockchain ledger records data via blocks, with each block containing cryptographically protected records of data, (in the case of the FnPS – payment instructions and other transaction data), which are ordered and permanently stored on every node. The software that constitutes a node is an integral part of the blockchain infrastructure. Each node is configured to store the same state of the ledger and to communicate and preserve the integrity of data on the blockchain. It is this peer-to-peer network of nodes which fuels transparency, security, resilience and fairness.

In the context of the FnPS, there is only one type of node: Full Copy Node (‘FCN’). FCNs store the historical data associated with the blockchain and constantly update as blocks are distributed across the network of nodes. As the FCNs store the same records, there are multiple sources of truth and auditability which prevents double spending. Before any data is recorded it must be considered reliable during a consensus round. There are many consensus protocols or algorithms available to agree the validity of transactions. In the FnPS, the chosen consensus protocol is known as IBFT 2.0 Proof-of-Authority. This protocol allows for faster block creation and much greater throughput of transactions in the FnPS. It also supports deterministic finality which is vital in determining settlement finality of payments.

There is a subset of FCNs which are ready and available, at all times, to be selected during a consensus round to validate the pending transaction pool. In the FnPS, these selected FCNs are called Validator Nodes (‘VNs’). As a collective, VNs have a crucial role in ensuring the transaction information is reliable before recording to the blockchain ledger. The VNs assume an open adversarial environment i.e., anybody could be potentially falsifying transactions. Therefore, the VNs will check pre-determined fields in each payment transaction:

Depending on certain parameters of the network, the rate at which VNs can verify transactions is remarkable, ranging from 800-1200 transactions per second. Therefore, the FnPS is as equipped as centralised payment systems (if not better placed) to handle periods of increased transaction volumes i.e. during times of market stress. The contractual agreements and financial incentives for operating VNs need to be mutually beneficial in order to achieve optimal performance, as highlighted by the BIS in a recent publication. The FnPS has been designed in accordance with the applicable laws, to ensure that all transactions are settled with finality. The exact moment of settlement finality will be determined by the rules governing the FnPS. Fnality is confident that the technology build of the FnPS will address the salient points raised in the BIS publication.

Do nodes present a risk to the FnPS?

Whilst the role of nodes could be viewed as the ‘technical backbone’ of the FnPS, it would be incorrect to view a single node as having a crucial role in the payment system or bear a substantial risk. The failure of a single node would not result in downtime of the FnPS. Since all the nodes have the same programmed functions and store the same data, no single node has a greater influence over another. Where a node crashes for whatever reason, the payment system is not impacted because the nodes remaining online can continue processing and other nodes on standby can be selected for consensus rounds (if needed). Once a node resumes after a period of downtime, it will begin rapidly updating the missed transaction history.

With the rise in state-funded criminal activity and malicious actors attempting to target national payment networks, centralised payment systems - even with numerous back-up servers - are not sufficiently robust during a large-scale attack. In order to halt the FnPS validation process, the entire network of nodes would need to be neutralised. This is highly unlikely because the VNs will be hosted by financial institutions with strong security policies and controls. Instead of attacking one entity or individual, a cyber-attack would need to take down at least 15 VNs hosted by financial institutions at the same time. In centralised payment systems, where there is typically an annual downtime of between 2.5 – 5%, there are knock-on effects for the financial sector in seeking alternative means to cover the payment leg of transactions. In contrast, the FnPS anticipates an annual uptime of 99.999% directly empowered by the underlying network of nodes. The distributed nature of the technology underpinning the FnPS significantly reduces the likelihood of downtime and the impact of risk decreases with the growth of the node network.

The underlying technology of the FnPS is novel and innovative. Our shareholders and the financial sector at large desire a solution that is solving a complicated problem from its roots. The distributed approach adopted by Fnality will ultimately create a more resilient financial sector. In addition, the technological advancements offered by the FnPS are also necessary in fulfilling future central bank agendas. Fnality fully appreciates the technological, commercial and regulatory interdependencies in ensuring the safety and soundness of the FnPS.

This article provides a brief insight into the operations and design of FnPS, and further Fnality articles and papers are available to complement and enhance understanding.

Note: This blog post is for informational purposes only. The information and the terminology used in this document are subject to change.