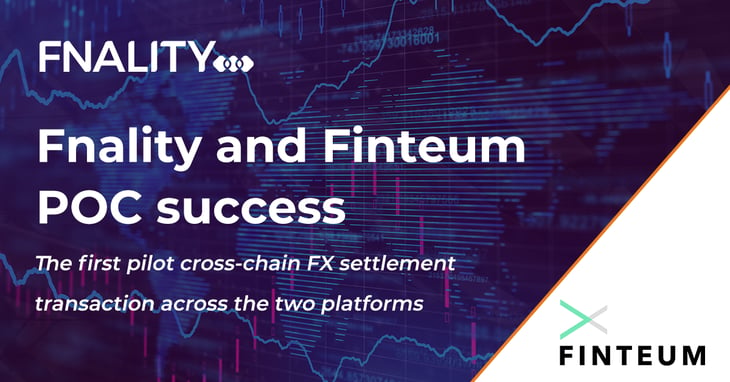 LONDON – 4th October 2022 - The collaboration between Fnality and Finteum has taken a step forward with the announcement of the completion of a successful proof of concept (POC) involving the first test of FX settlement transactions on a Payment-versus-Payment (PvP) basis, across the Finteum Platform, and two Fnality Payment Systems (FnPS), representing two currencies, in under 10 seconds.

Finteum joined the Ecosystem TestNet - built in partnership with Adhara - and completed testing of the interoperability of the two systems (Finteum’s platform and both FnPS), successfully demonstrating interoperability and the ability to settle intraday FX swaps in a matter of seconds.

The transactions were triggered by the Finteum’s Platform, which is built on R3’s Corda Protocol, and settled on a PvP basis through two FnPSs, each representing the 2 different currencies (GBP and USD). Settlement status information then was communicated back to the Finteum’s Platform dashboard, proving that interoperability can be achieved in both directions between Corda and Enterprise Ethereum.

Connecting to the Ecosystem TestNet, Finteum was able to prove that when two large banks agree to execute an T+0 intraday FX swap with each other, an instruction can be communicated successfully to the FnPS, and both the near and far leg of the transaction can be settled quickly. Based on Finteum’s testing, the average time for 4 test transactions executed in quick succession was under 10 seconds.

Finteum and Fnality previously conducted the first successful interoperability test in 2019. However, this latest test conducted through the Ecosystem TestNet was designed to simulate conditions that reflect the desired end state in a live environment. Given these promising results, the Fnality and Finteum teams are now confident that the two systems will also be interoperable once they go into production. Once live, Banks will be able to agree and execute a trade in the Finteum Platform and settle it PvP via the FnPS in seconds, even when there is heavy traffic on both systems and the underlying RTGSs are closed (for example, during the night).

Brian Nolan, Co-founder of Finteum, said: "The Finteum client banks' first preference is to settle these transactions on a PvP basis in FnPS, which aligns with the goal of the CPMI to increase PvP usage. The Finteum team hopes that central banks and regulators will be able to find time to prioritise the review of FnPS, so that systemic risk can be minimised."

Rhomaios Ram, CEO at Fnality International, said: “This PvP PoC is a significant step for Fnality as it proves that once the Fnality Payment System is live in a second jurisdiction, participants will be able to swap and atomically settle funds from their home currency to another currency and vice versa in a matter of seconds.”

Julio Faura, CEO at Adhara said: “It continues to show how valuable a collaborative wholesale TestNet can be and has proven once again the seamless value Adhara’s Digital Cash (DC) Commander can add to Bank Treasuries; helping them easily engage, control and ultimately increase their understanding of how this future model for finance comes together for them.”

Founded in 2019, Fnality is a consortium of global banks that is building a regulated payment system to support the growing industry adoption of tokenised assets and marketplaces. By using distributed ledger technology (DLT) Fnality offers central banks a simpler, faster, safer, and more resilient, risk-free system for managing digital payments. Fnality developed the Fnality Payment Systems (FNPS), a network of fully regulated DLT-based payment system, one in each currency area, enabling its participants to settle single currency on-chain payments (P), as well as on a Delivery-versus-Payment (DvP) and a Payment-versus-Payment (PVP) basis.

The Sterling Fnality Payment System has recently been designated by HM Treasury as a systemically important payment system in the UK, signifying a crucial milestone achieved in the Fnality’s UK go live journey and meaning that the Sterling Fnality Payment System is now the first distributed ledger technology (DLT) based, fully-regulated payment system in the world.

With a global roll-out set for 2023, Fnality’s network of distributed Financial Market Infrastructures (dFMIs) will provide near-real-time 24/7 settlement capability and interoperating with other platforms, to allow banks to significantly reduce their intraday liquidity requirements.

Finteum is creating a global financial market for intraday FX swaps on distributed ledger technology (DLT). The Finteum Platform is an execution venue for bank treasury teams to execute intraday FX swaps with each other, where the near leg and the far leg of the transaction both settle on the same business day, at pre-agreed times. The Finteum Platform also enables banks to execute intraday repurchase agreement (repo) transactions with each other.