Blockchain, DLT, dFMI. Why we need to choose carefully!

Blockchain is? Pick a headline: a) the global panacea for lots of ills, or b) all hype and more talked about than actually used. Does it matter? Unequivocally, it does. Well, at the very least, for those of us in Financial Services.

If you want to have a long-term impact, build the roads.

Stewart Brand points out that if you compare two maps of downtown Boston – from 1860 and 1960, for example – virtually every single building has been replaced. Gone.

But the roads? They haven’t changed a bit. The curbs and boundaries and connections are largely as they were. With the exception of a Big Dig, a Robert Moses or an earthquake, the roads last forever.

That’s because systems built around communication, transportation and connection need near-unanimous approval to change. Buildings, on the other hand, begin to morph as soon as the owner or tenant decides they need to.

When creating an organisation, a technology or any kind of culture, the roads are worth far more than the buildings[1].

As we look at tokenisation and Blockchain we need to think hard about the infrastructure we will need in the future. It takes proper planning; nobody would like to repeat the experience of what was once called British Rail who years back bought lots of snow clearing equipment and then blamed the next winter’s chaos on “the wrong kind of snow”. Equally, we’d do well to avoid the mistakes in Portugal that led to a massive toll road building programme for roads that few people can afford to use.

The back-office and its settlement processes are the “road network” of banking; they allow the smooth flow of financial traffic every day. In the interests of security and reduction of cost and various types of operational complexity, these activities have been increasingly concentrated into centralised structures that we refer to as Financial Market Infrastructures (FMIs); for example, payment systems, such as CHAPS or T2, settlement systems such as Euroclear and Clearstream, Central Counterparties (CCPs) such as LCH.

The purpose of FMIs has been to facilitate the efficient interaction of financial market participants. They enable the settlement of contractual obligations (trades) of multiple counterparties via a single entity rather than many bilateral relationships. In classic economic terms, they reduce transaction costs between participants.

Along with the FMIs have come two things:

The existing structure of FMIs has solved many risk and efficiency problems, but not without introducing new ones: systemic risk, both financial and technical/operational, as well as the possibility of monopoly behaviour.

One very specific issue is liquidity risk. Globally, there are a lot of FMIs, many places that securities clear or settle, on top of which FIs tend to have many Nostros or Correspondent Banking relationships. It is a huge challenge to have the right amount of money, in the right currency, in the right place at the right time. Alongside this, local rules govern access to the FMIs which creates a reliance on intermediaries in the form of correspondent banks and custodians.

Insiders refer to this as fragmentation and tiering. These are known phenomena and have been on regulators’ radar screens for many years (cf. 2003 report from, the Payments Risk Committee’s Cross Border Collateral Task Force: Managing Payment Liquidity in Global Markets: Risk Issues and Solutions Report by the Cross-border Collateral Pool Task Force). More recently, the circle of concern has grown because the number of firms offering correspondent banking services is in decline.

We know too that the regulation has a heavy cost. Estimates from Oliver Wyman put large banks' liquidity buffers at USD 100 billion, rising to USD 240 billion on average for the world’s largest 30 banks, with 10 to 30% driven just by intraday needs.

Now remember, these are all costs of doing things together; collaborating to fulfil contractual obligations. So, it is no surprise that the mere arrival of Blockchain as something that might help collaboration has generated a lot of interest and speculation. Accenture’s “Banking on Blockchain” is a benchmark study in the space and suggests that the industry could save some USD 8 billion per year with new processes.

So, if are willing to accept that Blockchain has some potential and that tokenisation of assets is likely, then what form might our future FMIs take? Do we need a Blockchain, what about DLT?

Terminology is, as ever, sometimes ambiguous; Blockchain and DLT, or Distributed Ledger Technology, are largely used interchangeably. They are, though, not the same thing. Blockchain is about a method (chaining blocks) and has come to mean trustless networks. DLT is more technically generalised and typically does involve some points of trust. So, we’ll stick to DLT and things with controlled access and permissions.

Is DLT what we need for tomorrow’s FMIs? Does that technology meet the needs of a tokenised market and might it help us with the challenges of fragmented liquidity?

DLT is based on the idea that separate copies of a database are synchronised to always eventually agree the same state: a shared ledger. In this model, processes can share the same data and be guaranteed that the state of the database is agreed. This eliminates the need for multiple copies of the same information to be stored in individual silos leading to a massive reduction in the need for reconciliation processes.

Today, DLTs are effectively pieces of enterprise software that use some elements of cryptography and distributed systems to achieve data integrity.  They can result in cost reductions. Quite conceivably DLT could help us reduce the liquidity fragmentation problem; one DLT representation of cash in each currency could be connected to many platforms and business applications. This would be a more advanced form of what has been in place in Switzerland for securities settlement & payments since 1992; cf. Swiss Value Chain.

What is not clear is whether the promised cost reductions can be maintained in a business model still oriented towards monopoly. As the Bank of England notes: “… despite the promise of disintermediation that the DL technology brings about, the industry may well simply transition from a CSD / FMI-centred monopoly to a DL-provider-centred one.”

So, for Financial Services, our view is that neither Blockchain nor DLT are sufficient solutions for tomorrow’s market infrastructure needs. We think that distributed Financial Market Infrastructure (dFMIs) are the answer to this risk. We need the FMI part with all its formalities: something regulated that meets the established standards; cf. The Principles for Financial Market Infrastructure (PFMI). Distributed in the sense of a peer-to-peer infrastructure of a mutual organisation of market players that use financial cryptography, consensus algorithms and a system of incentives to align the interest of the individual market players with the interest of all players to a resilient, less risky market fully compliant with the PFMI.

We think that a dFMI payments network delivers the essential elements for the “road network” that should be the foundation of tomorrow’s financial market infrastructure: 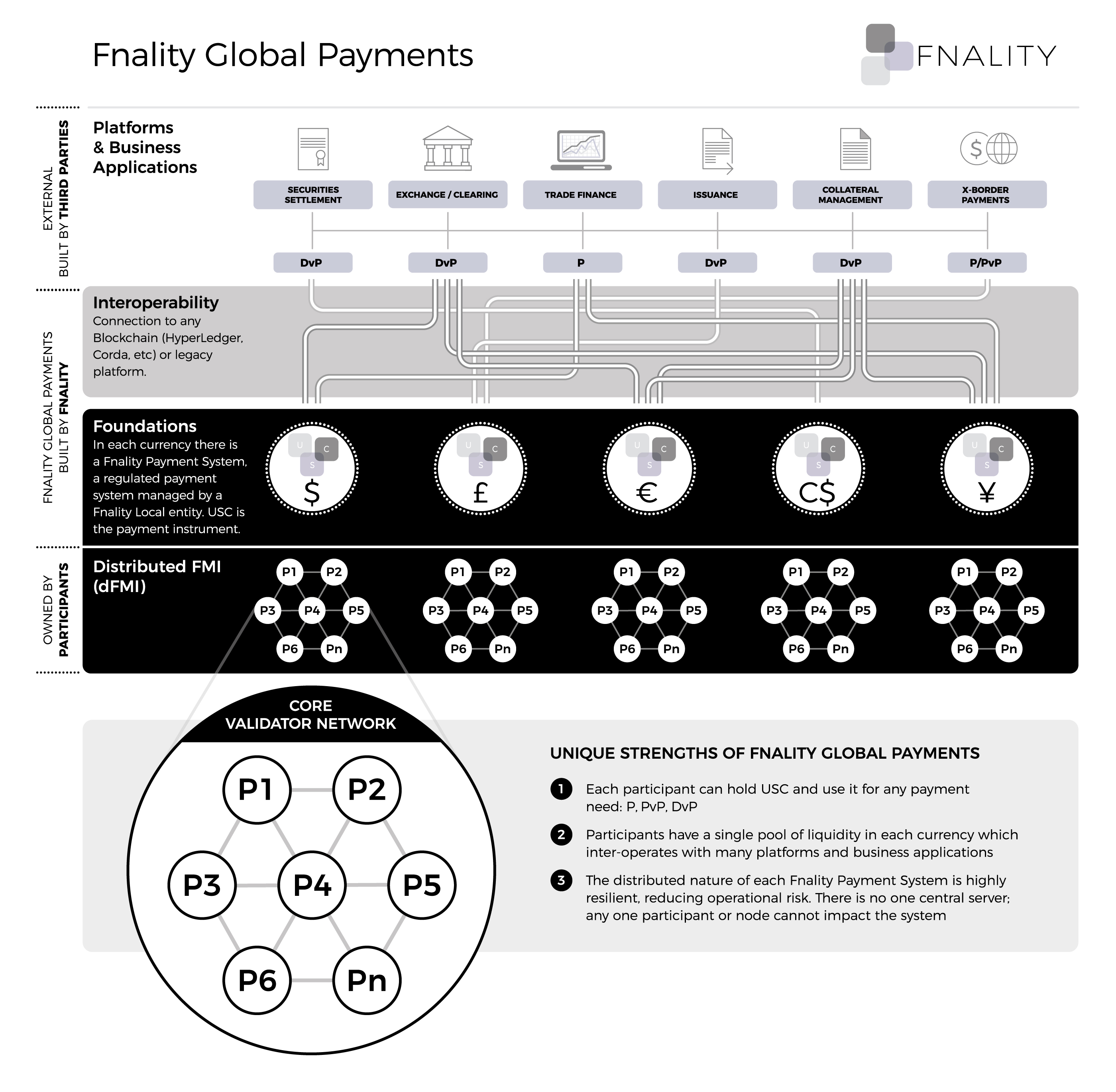 What Fnality is up to

At Fnality International, we are focused on enabling a very specific dFMI; the on-chain means of payment. In each currency we will have a Fnality Local which will run a payment system, the Fnality Payment System. USC will be the payment instrument. The combination of all the Fnality Payment Systems will be called Fnality Global Payments. It will enable peer-to-peer markets by inter-operating with many platforms and business applications. Figure 1 illustrates how the components fit together.

USC will be a “cash equivalent” with the superior risk characteristics of central bank money. Intermediation is removed, with all participants having direct access in every currency and the ability to hold USC as a settlement asset overnight, ensuring settlement is optimised.

One single pool of liquidity that can serve the settlement needs of many business platforms. Together with the work to tokenise collateral being led by HQLAx and Deutsche Boerse, this will allow us to realise something that has been the Holy Grail of our industry for many years; a single global collateral pool.