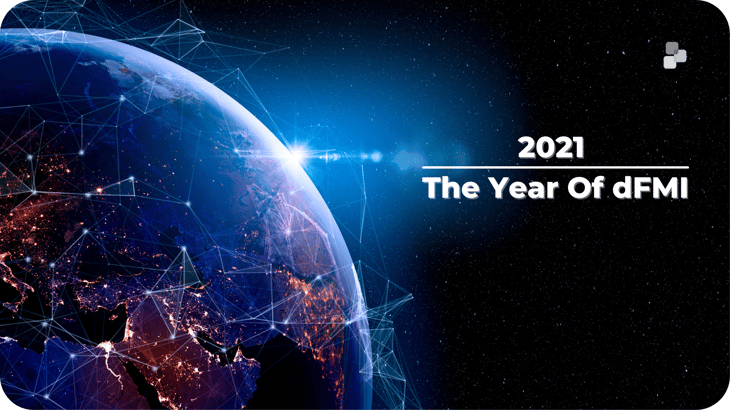 2020 may have been the year that “crypto” came of age. It started with PayPal enabling everyone with a PayPal account to dabble in Bitcoin and it ended with Dogecoin, a parody coin, rallying 20% to be worth USD 600 million! In the final months of the year, we saw an insurance company, MassMutual, buying for its portfolio, a significant asset manager, Ruffer, also allocating Bitcoin in its portfolio, with Bitcoin itself surpassing all-time price highs. Paxos raised USD 142 million to build supporting infrastructure and Coinbase has filed an IPO. As the Financial Times reported, 2020 was the year when Bitcoin went institutional.

Does this surge in institutional adoption have meaning for other blockchain or Distributed Ledger Technology (“DLT”) initiatives? Maybe. Cryptocurrencies, at their core, enable peer-to-peer transfer of value without reliance on a trusted central entity like a commercial bank, money transmitter or central bank. Removing reliance on a single central entity avoids the need for such party to have any financial or operational involvement in the transfer of value or to be trusted to verify the identity of participants, much like paying in cash. In other words, the “crypto” goal has been to create a “trustless" environment for digital value exchange. Financial Market Infrastructures (“FMIs”), the systemically important arrangements that clear, settle and record monetary and other financial transactions, can benefit from some of the features of cryptocurrencies, but cannot operate in a completely “trustless” environment; for legal and regulatory reasons, the identity of participants must be known and governance accountable. The surge in institutional adoption of “crypto” can have meaning for FMIs if they can find a way to reap the benefits of financial and operational disintermediation whilst managing schemes with known participants and complying with regulatory requirements.

Fnality has been working, for several years, on a new breed of distributed Financial Market Infrastructure (“dFMI”) that seek to harness many of the innovative elements of cryptocurrencies. Our initiative, Fnality Global Payments (“FnGP”), is rooted in the insight that the dFMI model can make a substantial contribution to the reduction of risk in the post-trade processes of capital markets. This risk can be broken into two main co-dependant parts: financial risk and operational risk. The financial risk associated with using a settlement asset issued by a third party commercial entity , intermediary credit risk, can be circumscribed by prudent legal structuring and is a common feature of pre-funded systems such as CHIPS, Faster Payments and RT1. However, operational risk is not so easily removed and, moreover, the centralised network effect of FMIs can concentrate and even introduce new systemic risks.

Cryptocurrencies offer a new operational paradigm. A crucial feature of Bitcoin has been its resilience which contributes to its “trustless” design objective: the Financial Times points out that resilience has been part of Bitcoin's “raison d’etre”. The resilience of cryptocurrency systems like Bitcoin and Ethereum comes from a combination of technological redundancy and mechanism design. Having multiple independent computers performing and agreeing the same tasks (e.g. validating that a payor has sufficient Bitcoin to transfer to a payee) increases fault tolerance and attack resistance, while an embedded economic mechanism model in such cryptocurrency systems provides natural incentives for participants to collectively maintain the systems as intended. None of these ideas are new, but the integrated interplay of these design features were first demonstrated by Bitcoin. The key for dFMI is find a way to replicate these desirable features while ensuring both interoperability with other systems and appropriate regulatory compliant governance for wholesale financial markets, including the identification of participants. We discuss resilience in greater detail in a forthcoming paper and the specific governance considerations related to Fnality Payment Systems here.

However, the potential of dFMI lies beyond the use of blockchain to achieve resilience. The primary rationale for this shift is to catalyse a change in market structure that holistically eases many of the frictions in post-trade capital markets operations, reducing costs and freeing up resources for the benefit of everyone. The starting point is to remove the need for intermediation (as described here). But it is interoperability with other FMIs that unleashes the full potential of dFMI. Interoperability opens up the possibility of a new “layered” approach to post trade.

For some time now, players and pundits involved in the blockchain space have discussed an Internet of Value (IoV). We first saw the concept here and, since then, Ripple popularised the term here. A simple description comes from Finance Monthly:

“The Internet of Value refers to an online space in which individuals can instantly transfer value between each other, negating the need for middleman and eliminating all third-party costs. In theory, anything that holds monetary or social value can be transferred between parties, including currency, property shares and even a vote in an election.”

What is clear is that the IoV is unlikely to be easily provided by a centralised architecture or linked centralised architectures. The Financial Stability Board (FSB) has laid out a roadmap to enhance cross-border payments, a fundamental aspect of IoV. The FSB identified high cost, low speed, limited access and insufficient transparency as the main weaknesses in today’s cross-border payments infrastructure. The FSB roadmap identifies nineteen building blocks, but notes “not all building blocks are simple improvements to pre-existing systems”. Moreover, co-ordination amongst jurisdictions with differing legal frameworks will also be required.

Difficulties also appear in the current structure of capital markets settlements. Historically, post trade services are bundled by different providers which typically drive a vertical integration of services. In post-trade, custodians usually bundle services such as custody with clearing, settlement, financing, account administration and so-on. However, as a matter of prudent risk management, users cannot rely on single providers for all of their services. For example, a UK bank using a US correspondent for its USD payments cannot rely on just a single correspondent in case of issues such as technical and operational outages. They need to have backups and they need to drive competition amongst rival providers for quality and value. This leads to an operationally suboptimal set of duplicative correspondent banking arrangement and associated processes driving costs upwards and introducing operational complexity and risk as well. Furthermore, balance sheet resources such as liquidity are difficult to manage across multiple providers.

The advent of dFMI allows the possibility of a different model, working in a similar fashion to the internet which connects local internets through common nodes known as Internet Exchange Points (IXPs). In this model, the settlement layer where value is exchanged becomes completely interoperable: multiple dFMIs could link together to form this new, protocol driven, settlement layer. Of course, any dFMI including their links to other dFMIs will need to be fully compliant with the requirements of competent financial market authorities. dFMI could offer the first glimpse of IoV for capital markets.

So what will make 2021 the year of dFMI? It is critical that authorities develop a full appreciation of both the benefits and risks presented by initiatives such as Fnality Global Payments. A steady drumbeat of regulatory pronouncements throughout 2020 suggests that regulators and policy makers are well attuned to the significant transformational potential of DLT for capital markets and the need to adopt a proportionate regulatory response to the many private institutional initiatives emerging from this space. Examples include the European Commission’s proposed draft MiCA regulation, the proposed STABLE Act in the US, and three separate reports on stablecoins from the FSB, the BIS and the President's Working Group in the US. But these reports and proposals are mainly focused on retail initiatives. CPMI-IOSCO intend to further identify the main issues for systemically important stablecoin arrangements to comply with the Principles for Financial Market Infrastructures (“PFMI”), but such clarification or interpretation should not, in our view, fundamentally change the underlying principles that apply to systemically important global stablecoin arrangements. The big trigger for dFMI will be regulatory pronouncements applicable to the wholesale space.

Since the appeal of cryptocurrencies to investors is in part due to the superior resilience achieved through their underpinning DLT, it is a logical step to include these features in the next generation of FMI where resilience is of paramount importance. We are optimistic that 2021 will be a turning point in the recognition of this by regulators and policy makers. A recent announcement by the OCC allowing banks to participate in node verification networks has led some to predict that 2021 is the year of the stablecoin. If our prediction holds, 2021 might just also be the year that blockchain starts to disrupt mainstream financial market infrastructure.